The colorful gem of the Aegean

Milos is known as the “island of colors” due to its multicolored palette of landscapes and unique geological formations, the obsidian stone and its coastline of spectacular beauty and charm. It is also known as the place where the statue of “Venus de Milo” (Aphrodite) was discovered, an ancient Greek sculpture that is today hosted in the Louvre Museum in Paris. It is only recently that the island has been noticed for its astonishing volcanic shorelines, its colorful landscapes, exotic waters and beaches of every shape and color, its spectacular sunset views and picturesque villages, making it an off the beaten track, but still easily accessible island that is connected to most other Cycladic destinations. The island’s unique relaxing atmosphere is perfect for serene getaways and romantic escapes for couples, but also for anyone who wants to experience the real, extraordinary beauty and peaceful holidays.

Adamas (or Adamantas)
Adamas is the main port of Milos and is considered the safest natural port in the Aegean. This white washed seaside village becomes vibrant in the summertime, and offers a combination of relaxation and calmness in the daytime with some nightlife and entertainment. The area is surrounded by many beaches, various hotel units, cafes, bars, restaurants and shopping district. It has many old churches as well as mining and church museums that are worth visiting. Right at the Adamas harbor, there is the only exploitable and recognized therapeutic hot–spring of the island, the “Hippocrate’s Cave”. This newly built cave–shaped thermal spa resembles the ancient Catacombs and is worth paying a visit during summertime.

Lima, Mandrake, Fourkovouni, Fyropotamos, Areti
Small fishing villages famous for their characteristic architecture called “syrmata”, traditional boat parking lots or houses, situated right at the sea with various brightly painted doors and living quarters on the upper floors. A must see! Locals host a lot of festivals in these picturesque areas, where fresh fish and drinks are served all night long accompanied with local music and dancing.

Plaka
Plaka is the capital of Milos and one of the most intact capitals of Cyclades with infinite beauty that you must visit and explore. The village has a traditional Cycladic architecture, whitewashed houses, colored windows and doors, balconies full of flowers, shopping district, art galleries and narrow white alleys. On the hill top of Plakalies an imposing Venetian Castle and the Church of Thalassitra, offering panoramic views to the bay of Adamas and unforgettable sunsets, comparable even to Santorini’s sunset known worldwide. Here you will find the Folk Museum and the Archaeological Museum along with other imposing churches.

Pollonia or Apollonia
Pollonia is a picturesque fishing village that has lately become very popular among visitors as it offers abundance of accommodation, including cave-style boutique hotels along a sandy beach with azure waters and fine sand on the north side of the island. The village most probably got its name from the temple of Apollo that existed in the settlement on the lighthouse of Pelekouda. The area of Pelekouda, by far, one of the best sunset spots of the island, where you can also find two stone chairs which according to tradition promise that the couple who sits there will be together forever. Pollonia is very fashionable and busy coastline with plenty of gourmet restaurants, traditional tavernas, bars and cafes that stretch up between the churches of Agia Paraskevi and Agios Nikolas at its two ends. Pollonia also serves as a departure port for daily local ferry to Kimolos which runs all year round, or if you take a private boat it is also possible to visit Polyaigos, and Glaronissia, the small volcanic islands with impressive rock formations coming up from the sea.

Trypiti
Trypiti is a traditional village near Plaka built amphitheatrically on the ruins of the classic city of Klima. The church of Agios Nikolaos dominates the center of the village while picturesque white windmills stand on the highest point of the village and some of them have been turned into elegant houses for rent. In Trypiti you can enjoy some beautiful local dishes at the restaurants as well as a spectacular view of Adamas. On a short walking distance you will also find the Catacombs and the Ancient Theater. Off the road to the Catacombs, a dirt track will lead you to the spot where a farmer found the Venus de Milo in 1820.

Milos is famous for its impressive, colorful coastline. Its phenomenal volcanic shore is comprised with more than 75 beaches of multi-hued landscapes of unspoiled natural beauty, crystal blue waters and spectacular white, yellow, red or even black, sandy or rocky coasts. It is certain that the island’s unique coastal beauty of all shapes and colors will offer you an unforgettable experience. Some of Milos’s best beaches are:

According to mythology Milos was the island of Aphrodite, the Goddess of beauty and love. Legend has it that Milos was the son of a royal family in Cyprus and was sent by Aphrodite to inhabit the island after the suicide of his parents. There he developed the first colony and the island was named after him.

7000 BC – 3000 BC: Milos has been inhabited since the Neolithic age and developed rapidly due to obsidian, a volcanic stone hard and sharp as glass used by the Melians for the construction of tools, blades and weapons. At that period, obsidian was considered a precious stone and was exported to the Aegean islands, Crete, Peloponnesus, Thessaly and the Asia Minor.

2800 BC - 1100 BC: The settlement of Phylakopi was established on the northeastern side of the island, and becomes the trade centre of obsidian. The city of Phylakopi thrived for over 2 millenniums and created a superior civilization.

1000 BC: The Dorians settled in Milos and a new settlement was built in Klima. The new town developed rapidly in arts and crafts, and the famous Melian vase was introduced.

415 BC: The Melians remained neutral in the Peloponnesian war, and the Athenians forced them to leave the island, by killing the old people and selling the young men, women and children for slaves. They returned only after the Spartans defeated the Athenians.

311 BC: Up until 311 BC, Milos was ruled by Macedonia and then Egypt. During this period Milos saw economic and cultural growth and the famous statue of Venus (hosted at the Louvre Museum in Paris) and the imposing statue of the Poseidon (displayed in the National Museum in Athens) were created.

197 BC: Milos came under Roman influence. The island accomplished great prosperity, its inhabitants became very wealthy and a number of new buildings were constructed, including the Ancient Theatre. Christianity also made its appearance during the first century and Catacombs were built for religious rituals and burials. After the decline of the Roman Empire, Milos passed on to the Byzantine Empire, along with the rest of the Cyclades.

1207 AD: The Venetian took over the Aegean.
1268 AD: The Melians rebelled against the Venetians, but failed since the Byzantine fleet never came to their aid.
1566 AD: The whole Cyclades area came under the Turkish control. All the years of Turkish rule, Milos was never occupied by the Turks, only inspected by them on how the islanders lived.
1771 AD: Milos and nearby islands fell under the Russian control.
1774 AD: The Turkish rule was re-established.
1821 AD: Milos was the 3rddistrict in Greece to rebel against the Turks.
1912 AD -1922 AD: During the World War I, Milos Gulf was used by the British and the French fleet as naval base and Adamas was used as headquarters for Allied Command in the Aegean.
1941 AD: Milos was ruled by the Germans but won back its freedom in 1945.

Milos is known for its cooking and exquisite local specialties. Simplicity and diversity prevail in the Melian cuisine. Its strong tastes, pure ingredients, fresh fishand variety of dishes excite and pleasantly awake the senses of its visitors. Some of the most representative local dishes are:

Religious Festivals
Milos is an island with many local celebrations and religious festivities, like most Greek islands. The religious festivals take place throughout the island all summer long, and include traditional delicacies, local wine and of course folk dances. Some of the important celebrations are: 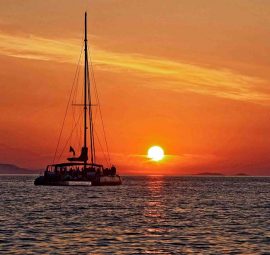 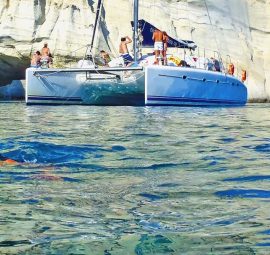 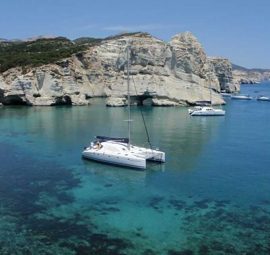 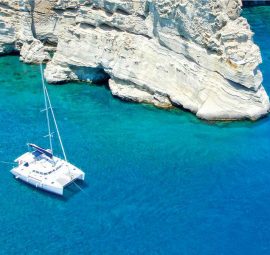 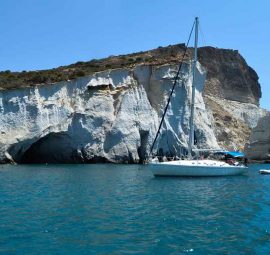 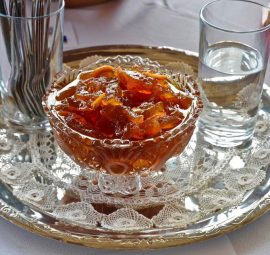 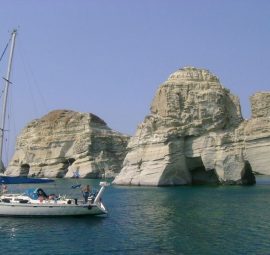 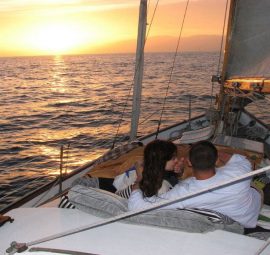 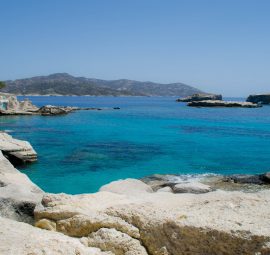 See Kimolos Island in a Day 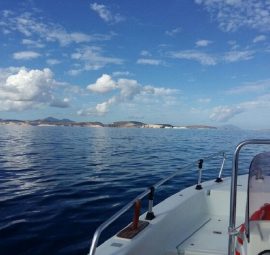 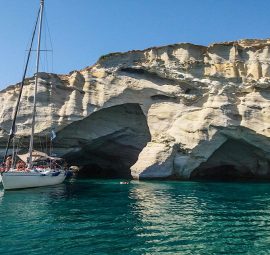 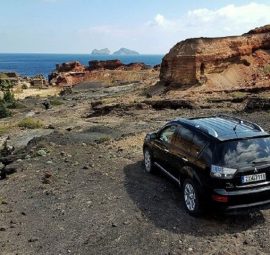 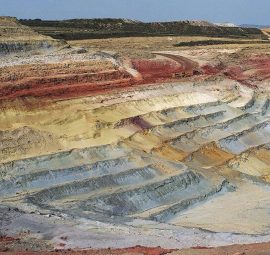 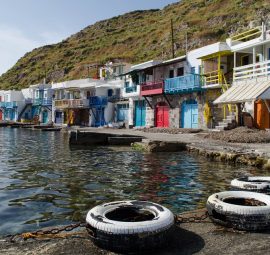 See Best of Milos in One Day 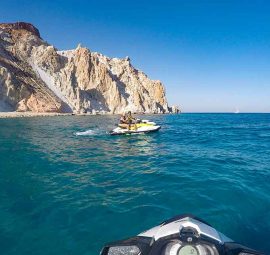 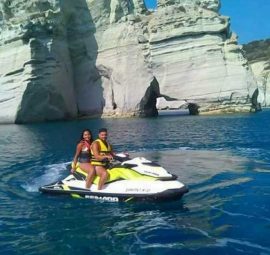 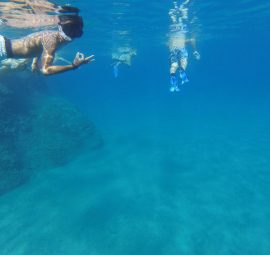 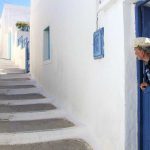 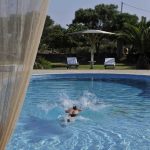 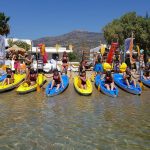 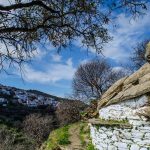 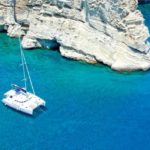